The JMeter module was removed from Attivio Platform 5.5.1. Users can view the Administrator UI's Performance Monitor, System Status, and System Events pages to see the output that used to be available in JMeter, as noted on this page, and they can use the aie-exec loadgen or aie-exec querygen tools to simulate ingestion load or query load, respectively, on the system.

If desired, users can download JMeter from the Apache website (http://jmeter.apache.org/) and run it on their own.

Many of the JMeter monitoring features provided before release 3.5 have been subsumed by the Performance Monitor  , System Status, and System Events displays of the Use the Attivio Administrator.

As a side-effect of these improvements, it is no longer possible to use JMeter to monitor ingestion rates, query rates, garbage-collection, or memory utilization. Current use of JMeter is restricted to simulating multiple users making query demands on the system.

Follow these procedures to get JMeter running with your AIE project.

The following procedure sets up a multi-node system and then connects the JMeter interface to it.

This opens the JMeter user interface and connects it to the nodes of the AIE project.

Add the following code snippets to the indicated configuration files:

Then follow the procedure in the previous section. When it is time to start to AIE node, use start-aie-multi.bat to start the local node.

Then complete the start-up procedure as before.

Notes on the Auto-Generated Test Plan

The aie-exec jmetertestgen executable combines a built-in template with a project configuration to generate a project-specific test plan. The generated test plan will include elements for generating query load and commits.

The standard configuration server (-z) and project name (-n) arguments are all that are required. The output file defaults to projectName.jmx or can be set using the -o option.

Please be aware that, while JMeter allows for modification of the individual thread groups and other features generated in this test plan, modifications beyond the default configuration created by jmetertestgen are for expert users only and are not supported.

Fortunately, you can always go back to jmetertestgen and create a new, default test plan file.

JMeter ships with AIE in the $AIE_HOME/modules/jmeter directory. Running JMeter requires using a custom bat or bash file in order to properly set up the classpath to access AIE jars.

Once you have JMeter open and connected to AIE, we can use it to place various loads on ingestion and query workflows, and the observe the results in the Performance Monitor.

The automatically-generated Test Plan appears in the tree pane. Each thread group node may be thought of as a test. It is configured by the individual samplers, timers, and listeners that are grouped under that node. (The Apache JMeter User Manual is very thorough. This section describes only the features that are pertinent to AIE.) 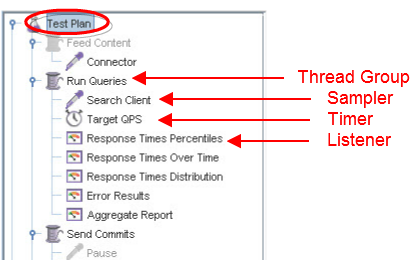 The nodes that are gray are not enabled. To enable a node, right-click the node and look for the enable option in the context menu. 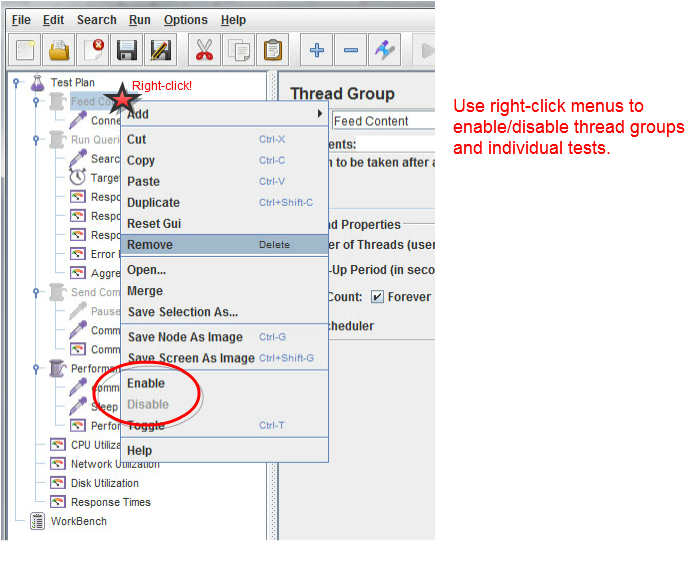 To run the enabled tests, use the video control buttons in the control bar at the top of the screen.

You can control and monitor the activity of your ingestion feeds from JMeter.

These are the parameters for the Feed Content Thread Group. Samplers used in this group will run connectors, so it is probably best to have them run once and then stop.

The Search Client Sampler lets you configure one connector.

If you want to monitor all the connectors in your system, you have to define them in the "Feed Content" thread group.

To add a new connector, you can right click on a existing one and select "Copy", then modify the following configuration parameters to meet your needs:

JMeter can use an external text file to generate keyword queries, simulating multiple users bombarding the system with queries.

Below is an example of what a sample query file might look like. This would be a simple text file with one column of keywords:

We put it in the *<project-dir>\conf* directory, but the location of the file is not critical.

You must enable the Run Queries thread group. Use the right-click menu as described above on this page.

The Run Queries Thread Group has a Java Request window labeled Search Client where you can custom-configure aspects of your query setup.

Uses for each of the fields shown in this UI are outlined in the table below:

The query mechanism can be throttled to produce no more than a given number of queries per second. This is the role of the Target QPS Timer. 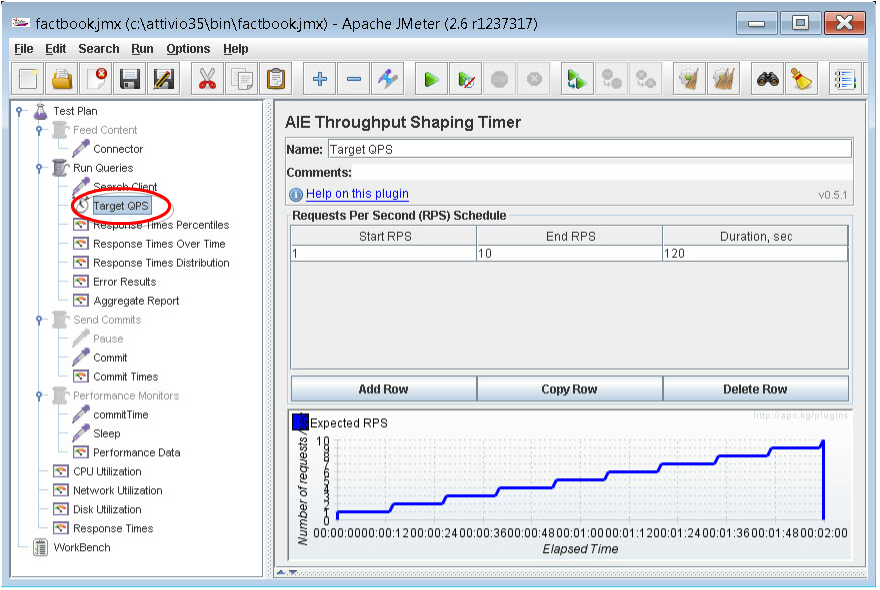 The object is to describe an increasing load. It begins with a certain number of requests-per-second (RPS), gradually increases for some duration, and reaches a maximum RPS value just before shutting down. The UI helpfully shows the profile of expected query loading in the graph at the bottom of the screen.

To see the query loading of AIE, view the totalQps metric in the Performance Monitor. The following graph shows three bursts of query activity. 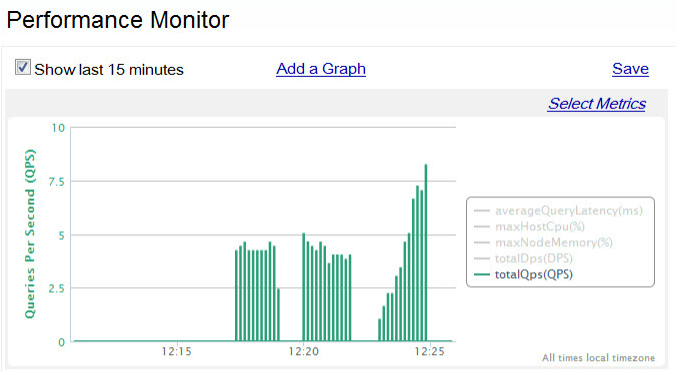 In addition, the Run Query Thread Group includes several Listeners that report the results of the query event.