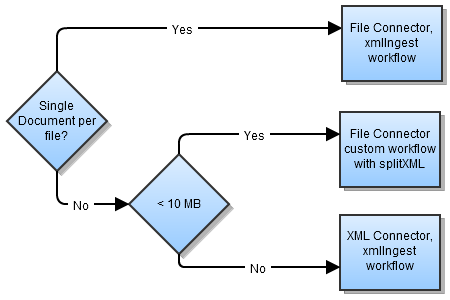 AIE contains several components specifically designed to support XML ingestion. Most of them are part of the standard xmlIngest workflow.

The ParseXml stage is designed to parse XML from ContentPointers , strings, or byte arrays into a DOM object. This is typically the first stage in any workflow designed to handle XML, as later stages all depend on the parsed XML. In addition, the ParseXml stage supports adding namespace prefixes to URI mappings to the DOM. This ensures that later stages can properly select nodes based on namespace-aware XPath expressions.

The ParseXml stage uses the encoding scheme (character set) declared in the XML header: it defaults to UTF-8 encoding if no character set is specified in the header.

The ExtractXpaths stage uses a series of XPath-to-field-name mappings to copy content from XML elements into IngestDocument fields.

It is considered best practice to include a dropDom stage at the end of most XML workflows. Once XML parsing and extraction is complete, deleting the DOM object from the IngestDocument saves on memory footprint and network bandwidth across the system.

This connector supports the Activating Incremental Updating features. There is a tutorial example of incremental updating here.

After running the connector to ingest documents with Incremental Mode activated, be careful with any future configuration changes to the connector, as such changes can cause one or more of the following issues:

If you must make changes to change the connector configuration after running it, follow these steps to keep your system fully up to date:
1. Delete any previous documents the connector created in your AIE index.
2. Select your connector from the AIE Administrator's Connectors tab, and Reset the connector.

AIE contains a default workflow to handle RowSet XML formatted content. Generally, rowset XML files are large, so using the XMLScanner is recommended. The default rowsetIngest workflow can ingest the resulting IngestDocuments with each rowset XML field mapping to a new AttiviDocument field as expected.