A typical AIE project uses a single index. Though you can partition and/or duplicate that index across many AIE instances, it is still one index – updated, committed, and optimized as a single entity.

It is sometimes more efficient to subdivide the index into zones.  Each document is placed in one zone, which is specified in the document.  By default, all queries are executed against all zones in parallel, but they can be limited to one or more zones. This creates opportunities for more-efficient queries and more efficient indexing.

This topic discusses the benefits and drawbacks of zoned indexing, the difference between zones and partitions, configuring zoned indexes, and provides a Tutorial Example.

This is an expert-level feature.

In some circumstances, using zones increases query performance. In other circumstances, zones can slow down queries. Discussing your index design with Attivio's Support Department before creating projects with zoned indexes is recommended.

What is a Zoned Index?

A zoned index refers to a single index, divided into zones so that each zone contains a subset of the indexed documents. Logically there is still only one index, but each zone within it uses a separate set of index files, allowing users to update each zone separately but query all of them together as one index or one or more of them separately. Additionally:

In certain cases, dividing and index into zones can:

Each of these situations is discussed below.

If an index contains fields used for sorting or joining, and these fields appear only in a well-defined subset of records (such as specific tables or record types), putting such records in their own zones reduces the size of sort and join caches. This is because:

In a common document-level security model, there is one security record containing an access control list (ACL) per data record. This model doubles the number records in the index, and as a result, all sort and join caches double in size. Putting the security records in their own zone alleviates this issue.

The three cases where zone indexing can reduce indexing time, as well as the index size are described below.

Both real-time fields and partial updating of records are zone attributes that slow indexing time and require more disk space. Typically, some of the records in the index require one of these features while others don't. For example, metadata, where documents' metadata (requiring partial updating) is split off from the main record into a real-time fields or a separate record that is partially updateable. If such records share a zone with the data records not requiring these features, the time penalty still occurs for all records. Placing the metadata in their own zone alleviates the issue.

One way to reduce the required indexing resources is to divide the index into silos (for example, one per month), so that all current indexing activity occurs within one silo at a time.  You can place each silo into a separate partition, so only one partition ingests documents at any one time. But querying across multiple partitions is significantly slower, especially for non-collocated joins.

Zoned indexing –  using one zone per silo – achieves the same reduction in the resources needed for indexing without hindering query performance.

Join queries may execute faster if one or more of the index zones do not contain any of the join keys used. This is not a common case, but sometimes it can have a significant impact on performance.

Zoned indexing is efficient when used skillfully, but there is also a downside. Zoned indexing can slow down query execution due to the overhead of dispatching the query to multiple zones and then assembling the matches into a single response document. The more zones there are, the slower the queries become. The impact of a handful of zones is negligible, but dividing an index into more than 20 or so zones is not recommended.

Why Split Documents into Separate Zones?

Look for these opportunities to apply zoned indexing:

Think of the difference between zones and partitions as follows:

If the project uses both partitions and zones, each partition contains all of the zones.

Zones are configured via the Index Feature, in <project-dir>\conf\features\core\Index.index.xml.

The following example shows the XML syntax for configuring zoned-index features. Each feature is described in the paragraphs that follow.

If zones are not configured at all, the default implied zone configuration is in effect. The implied default zone behaves as if it had the following configuration.

Therefore, if you don't configure any zones, there is always one zone named default. However, if you configure zones, you must explicitly configure the default zone in addition to the other zone.

In a zoned project, incoming documents have an associated virtual field called .zone.

It is possible to set the value of .zone programmatically using the IngestDocument.setZone()  method.  This approach is not recommended because the indexer will set the .zone value anyway, and if the indexer's value does not match the one you set programmatically, AIE will issue an error and drop the document.

Note that .zone can be useful when querying. See the discussion later on this page.

To commit a zoned index, issue a Commit Message to the index in one of the usual ways. For example, one can commit the index from the Administration Web Interface.

By using zoned indexing, you can declare all fields in a zone's index as individually updatable, as if each one of them participated in the Real-Time Updates feature. The new mechanism, however, is quite different and avoids some of the performance penalties associated with Real-Time Updates.

How to Update Individual Fields

Documents in a zone with field granularity can be updated using PARTIAL-mode documents as described on the Real-Time Updates page. Unlike real-time updates, however, these PARTIAL-mode updates will not take effect on an index refresh; you must commit the index (or at least the zone in question) before your updates will take effect.

The factbook project in the Quick Start Tutorial is a good example for demonstrating zoned indexing. The factbook example has four feeds. Three of them (country, medals, cities) load static records that change or update very infrequently.  The list of Olympic medals needs updating every four years. The list of cities needs updating with census data about every ten years.  New countries sometimes appear, invalidating countless maps and globes, but it doesn't happen often.  The news feed, however, likely updates at least once a day, and possibly more often. Each time this feed reloads, there are new RSS articles to ingest, and each round of ingestion ends with committing the index. This example separates the static records from the dynamic ones by using two zones.

In the tutorial below, you set up these two zones, load data into them, and learn to write queries that are zone-aware.

This tutorial presumes that you have completed the Quick Start exercise and understand its data, connectors, and query characteristics.

To work the zone example described here, run createproject to create a new factbook project, but you must first configure the zones by editing <project-dir>\conf\features\core\Index.index.xml before running it for the first time.

Edit <project-dir>\conf\features\core\Index.index.xml. Look for the index feature element of the configuration (<f:index>... </f:index>). Delete that element and substitute this one:

That is all it takes to set up zones in the factbook demo. Save the file.

Run createproject to create a new factbook project, as in this Windows command:

After starting AIE, go to the <data-agent>\projects\<project-name>\default\data\data-local\index\index subdirectory and view the directory structure below that point. You'll see separate index files for the three zones (default, static and dynamic). 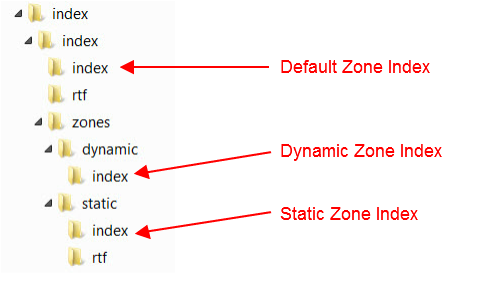 The zones are all one index, and you can query them all at the same time. However, since the zones are implemented as separate sets of index files, you can also query them separately. Doing so can reduce memory requirements for some queries.

Load the feeds in the usual way. AIE dispatches documents to different zones, based (in this example) on the value of the document's table field. There is nothing you need to do except run the connectors.

For the most part, AIE queries work exactly the same way in zoned and in unzoned indexes. This generalization applies to both the Simple Query Language and the Advanced Query Language. When you submit a query, AIE automatically applies it to all zones and returns the combined results.

Zoned indexes do offer some interesting query extensions, and one or two limitations. These are shown in the following example queries.

Using the .zone Field in Queries

You can use the .zone field in queries to restrict a query to a specific zone.

If you mention a zone in the query, AIE attempts to dispatch the query in the smartest possible way. This might mean sending the query to that one zone only. This can potentiallly improve performance. The Simple Query Language and Advanced Query Language recognize the .zone field, so you can restrict their queries to records in a specific zone.

For example, this query returns all records from the static zone:

This Simple Query Language query returns all records from the static zone that contain the word "diamond":

In the Advanced Query Language that is:

Both of these queries are dispatched to the static zone only.

Zoned indexing requires some adjustments in how AIE handles document ID fields in IngestDocuments.  In unzoned documents, the document ID is the value in the docid field. With zoned documents, however, the primary key of a document is a (zonename, docid) tuple. As such, it is technically possible for more than one document to have the same value in the docid field.  However the (zonename, docid) pair are guaranteed to be unique.

The IngestDocument  has two zone methods:

Furthermore, the get/setField() methods can handle the .zone field. For instance, if setField() is called with the field being ".zone", then the internal zone name attribute would be populated.

This allows both the zone name to be manipulated by all standard ingest transformers.

The virtual field ".zone" is:

Deleting from a Zoned Index

If you are using Zoned Indexing, note that the Delete Document Connector (delete by document ID number) operates on the default zone only. It cannot reach documents in non-default zones.

The Delete By Query Connector, however, uses a query to located the target documents. The query searches all zones by default, and can be adjusted to operate on specific zones if needed.